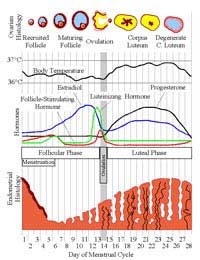 To improve your chances of getting pregnant it’s helpful to get in tune with your menstrual cycle. When you ovulate, your body releases a mature ovum, or egg, from your ovaries and if you have intercourse around the same time, the egg will be in a prime position to be fertilised by sperm. But how do you know when you’ll ovulate and can the timing be predicted?

Ovulation usually occurs every four weeks, about 14 days before the start of your next menstrual period and normally only one egg is released at a time. The uterine lining will have built up ready for implantation, but if the egg isn’t fertilised by sperm, it will be discarded in the usual way and your period will arrive about two weeks later. It’s a very narrow time period, as it only lasts for 12 to 24 hours and conception is only possible during this phase.

Sometimes you may have what’s called an anovulatory cycle, where an egg isn’t released. It’s difficult to know when this has happened, as you still get a period even though you haven’t ovulated.

If you’re keen to get pregnant, getting to know your body and when you’re likely to be ovulating can be a helpful way of timing when’s best to have sex. There are various methods used to do this and they can either be used on their own, or in conjunction with each other. Here’s a rundown of the main methods.

It’s possible to purchase a predictor kit which will predict when you’re about to ovulate, or are already ovulating. It works by detecting an increase in the Lutenizing Hormone (LH) in the urine, or an LH surge. LH is released from the pituitary gland, triggering a rise in oestrogen which in turn causes an egg to be released from the ovum and into the fallopian tubes. It usually occurs about 24 to 36 hours before ovulation, so it’s a useful signal to have. It’s a simple test that only needs to be carried out when you’re mid-cycle, but it’s not foolproof. It doesn’t always work for women who have irregular cycles and if you’re taking fertility drugs, they may interfere with the results.

Before you ovulate, your average body temperature is 97.0 to 97.5 degrees Fahrenheit, but when you’re ovulating it increases by about 1-2F. It may sound like a small increase, but this change can be tracked and may help you when you’re trying to predict when ovulation will occur. The change in temperature is due to the release of the hormone progesterone and your temperature will stay elevated until your next monthly cycle begins, then go back to normal (unless you get pregnant, when it will continue).

In order to track your basal body temperature, you need to start taking your temperature on the first day of your period and take it every day at the same time. It’s best to do it first thing in the morning, before you’ve moved around, showered or eaten breakfast, and to use an oral thermometer. Your readings may seem random for a while, but after a month or two you begin to notice a pattern. The method isn’t 100 per cent accurate, but it has been used for years and is easy and free to try.

During your 28-day cycle your cervical mucus will go through several changes in how it looks and this correlates with ovulation. At some points you’ll notice no mucus at all; whilst at other stages of the month it will be sticky and white. The key stage is day 13 to 15, when the mucus will be clear and a similar consistency to egg whites. It’s at this time that you’re at your most fertile. By checking your mucus every day, such as just after you’ve been to the toilet, you can get to know the changes it goes through and predict when you’re ovulating.

Some women get a pain in their lower abdomen at the time of ovulation, which is referred to as Mittlesmertz. For those aware of the pain, it occurs regularly each month, although the side of the stomach affected depends on which ovary is producing the egg. After Mittlesmertz has occurred, you’re likely to be fertile for 24 hours. Not everyone is aware of this pain each month, but for those that do get it, it can be a useful predictor of ovulation.

What Can You do Prior to Seeing a Specialist?