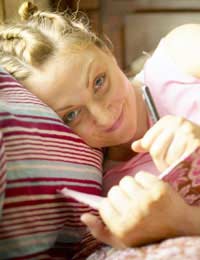 If you’ve been trying for a baby for a while or you’d like to speed up your chances of conceiving in the first place, charting your fertility factors can be a helpful method to try. It helps get you in tune with your body, improves your knowledge of your ovulation cycle and may up your chances of getting pregnant. Here’s how to begin charting the fertility factors in your life.

As the name suggests, charting your fertility is just that – a chart you make to track your monthly cycle and predict the most opportune moments to have sex in order to try and get pregnant.

It involves keeping track of various factors on a daily basis and recording the details so you can check to see when you’re going to ovulate. The main factors involved include:

It may seem like trivial details to record, but it can actually have a positive effect. The average couple successfully conceive after about five to six months of random trying, but people using the fertility tracking method often conceive in less than three or four months.

Basal body temperature has been used for many years as part of the technique for charting and predicting ovulation. Before ovulating, the average body temperature of a woman is about 97.0 to 97.5 degrees Fahrenheit, although it inevitably varies from person to person. However, once you’re ovulating your body releases the hormone progesterone, which increases your daily temperature by about .1-.2F. It then stays elevated by a couple of degrees until the next monthly cycle begins – unless you get pregnant, when it stays elevated.

The difference in temperature may seem minimal, but if you keep regular daily records for several cycles, you may begin to start noticing a pattern and be able to predict when you’re likely to be most fertile. To successfully take your basal body temperature:

Although the basal body temperature technique has been widely used over the years, it’s not always 100% accurate and some experts have queried its effectiveness. It won’t necessarily work for everyone, as ovulation can occur at different times of the month, but if you’re keen to conceive, it’s easy to do, pain-free and worth a try.

This technique doesn’t appeal to everyone, but another means of predicting when you’ll ovulate is to study the changes in your cervical mucus. It can be used on its own or together with the basal body temperature technique. Scientifically, some studies have found it to be a more accurate predictive method than measuring temperature.

Over the course of your 28-day cycle, the look and appearance of your cervical mucus changes. At the beginning of the cycle you’ll be having your period, then in the days after you’re likely to have little or no mucus. But from days 10 to 12 things change, with a thick and sticky mucus apparent in your vagina. It goes through more changes, gradually becomes white, thin, stretchy, slippery and then clear. The key stage are days 13-15 when the mucus will be clear and similar to the consistency found in egg whites and this is when you’re most fertile.

From about day 16 to 21 the mucus will change again, becoming thick and sticky again. Then at the end of the cycle, from day 22 to 28, it will dry out and you’re likely to be unaware of any mucus.

Ideally, cervical mucus should be checked every day. An ideal time to check is just after you’ve been to the toilet, after you’ve washed your hands. You can either rub your fingers or a piece of toilet tissue over the opening of your vagina, as this should help you detect any mucus. Have a look at the colour and consistency of it and make a record.

In addition to these two techniques, it helps your charting if you keep a record of when your period is due each month and when you’ve had sex.

What Can You do Prior to Seeing a Specialist?