Home > Readers' Stories > How I Conceived Two Children By IVF

How I Conceived Two Children By IVF 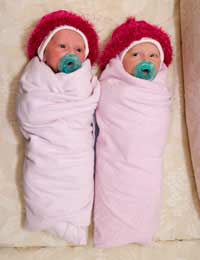 My name is Anya Sizer and I am the proud mum of two IVF children. Children we were told we would never have and given odds of 1 in 125,000 of ever conceiving. Six long years of Infertility treatments, thousands of pills, hundreds of needles and five rounds of IVF later we know that statistics don't always have the last word!

Our journey began in January 2001 when, very excitedly we came off the pill and looked forward to a few months of trying, before the inevitable blue line on the pregnancy test would occur. Well eight months later I had begun to get a little impatient and just a tiny bit apprehensive and somehow managed to get our doctor to agree to some initial tests - a precaution I thought, to reassure that all was OK. How wrong I was. Initial blood tests for me came back as normal, but a problem was apparent with my husband's sample, no sperm at all was detected, a condition called azoospermia .

That evening my husband went to bed and pushed the duvet over his head refusing to talk . I launched myself into an Internet fact-finding mission exploring every possibility to bring about our so wanted family. Both of us felt isolated, sad and incredibly scared that the doctor's words would be the end of the story . However though the end of one chapter, we were about to begin a whole new one, entering the weird and wonderful world of assisted reproductive technology.

From December of that year to May of the next there followed one form of test after another on both of us. Hormone levels, womb lining, fallopian tubes and a big operation to see what had happened with my husband - were all assessed until we were finally given a complete and VERY detailed synopsis of our individual circumstances .

That June we saw one of the UK's top gynaecological experts to get advice on next steps. He was kind but to the point. IVF wouldn't work for our extreme situation and our odds of ever conceiving through A.R.T was approx 1 in 125,000. In his opinion the next steps should be donor sperm or adoption only.

Again the days that followed were bleak and we felt stretched as a couple to almost breaking point. Why was this happening? Would we ever get through it? We took a few weeks to reassess and came to the very unpopular decision that 1 in 125,000 just might be worth giving it a go! After all what if we were that 1?

To anyone who hasn't experienced an IVF cycle it is hard to explain just how exhausting and overwhelming the whole process can be and how much strength you need to keep going physically and emotionally. During this first cycle the doctors realised too that on top of my husband's issues, I too actually turned out to be what they describe as a poor responder. Simply put, my body wouldn't respond to the drugs very well and try as they might to increase the drugs and extend the time given, I only produced four eggs. A small yield for someone in my age bracket. But again, we were determined that 1 egg and 1 sperm was all that they needed.

On the day of egg collection my husband too had to have an operation (another one! ) to see then if they could find that 1 sperm in the testes, a possibility even with azoospermia. To be honest we were pretty much waiting to go home with bad news most of that day as nothing had been found so far. But then the impossible happened and we received a call from the lab. Sperm had been found, not only that but they had immediately been injected into the four eggs they had got from me. And now somewhere downstairs in the hospital, in a small Petri dish lay four sets of potential life. We were, as we both lay there recovering from general anaesthetic, absolutely stunned . A huge hurdle, and perhaps the most important one in terms of my husband's self esteem had been overcome. We were in the race. The next few days as we recovered from the shock, our embryos continued to do well until on day three when they called us in for embryo transfer. 1 of the little chaps hadn't continued to grow and one was looking weak but two of the bundles of cells were declared just perfect, and those two were placed back inside me .

So then began the two week wait where every twinge and non twinge is a certain sign of pregnancy or non pregnancy depending on the mood of the hour! Finally though an end was reached and a pregnancy test bought. To say I was nervous would be an understatement as it really felt like life would never be the same one way or another whatever the result. The result however came ridiculously quickly as two very strong lines revealed themselves as a positive result, in every way possible! I was pregnant. It had worked! The next few days were spent telling friends and family and moving from a state of shock to excitement to fear and back to shock. Oh yes and also buying eleven pregnancy tests from boots just to make sure...

Then April 2003 our daughter was born with only one name really fitting, Hope. Our first miracle and our 1 in 125,000. A year and a half later we began to think about extending our family and for the next couple of years experienced one loss after another. One IVF miscarriage, two failed cycles and strangely of all a natural pregnancy which also never took.

Those years were often hard and we felt increasingly desperate and often isolated as some friends and family understandably began to wish we could just settle for the miracle we already had. It felt at times as if we were on a never ending roller coaster, with no sign of an end. Perhaps we should just stop.

So in Dec 2005 we decided to do our last IVF cycle before moving onto adoption. This cycle was by far the most intense as they had not only detected the poor response in me to be an indicator of early menopause, but also had found that I had a potential immune issue too! Not content with azoospermia to deal with, I had now added to the problem and meant our odds were even worse than when we began, who would have thought THAT was possible?

I also had to learn to do the injections myself in my stomach as well as finding the money for a cycle now costing over double of the others due to all the complications involved. A lot was at stake. Again my response was poor with only 4 eggs, and two out of the four eggs failing to fertilise. Twice during that whole cycle I was advised to really think about cancelling, or even giving up entirely, and as we faced such poor odds again I really felt this was the end of the line.

However two embryos were put in, both good quality and one especially huge one! This time on the two week wait I literally felt nothing and as I went in for the blood test that final day I told my husband I would call with a definite no later on to confirm. To everyone's amazement, not least mine the pregnancy test was however a very strong positive reading and as I walked into the clinic to collect the results the staff there all cheered knowing just how huge a battle we had been made to fight.

Again the pregnancy was a good one, though with a lot more drugs than last time including those stomach injections right up to 32 weeks. Then in August 2006 our second miracle was born. A son we called Barnaby, meaning son of comfort. Our road to parenthood was certainly one of the most difficult things I have ever been through, and to this day I still feel incredibly privileged and blessed to be a mum, even when at the receiving end of a tantrum from Barney!

I now work with couples going through IVF using coaching to support encourage and equip every stage of their journey. I see clients individually, run workshops and London's only fertility support group. One of my favourite quotes says that as individuals we should comfort others with the comfort we have received. I feel so very privileged to be able to live that out in my life today.

Fertility Expert made a donation of £15 to ACeBabes charity on behalf of Anya to say thanks for sharing her experiences with our readers.

If you have a story that you could share that will help or inspire others in a similar situation to one that you have experienced then please Contact Us. We can change names etc. to keep you anonymous.