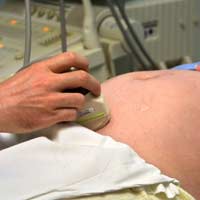 Terry breathes in deeply as she sits down in the coffee bar where we have agreed to meet to interview her about her experiences of infertility treatment. “It is so unusual for me to be able to sit down and to finish a whole cup of coffee while it is still hot,” she laughs, but the skin around here eyes and mouth looks taut and drawn and she is obviously tired.

Perking up after a decent dose of caffeine she produces some photographs from her bag of her three gorgeous babies – twin girls aged 16 months and a boy who is now almost 20 weeks. “It's difficult to believe that just 2 years ago I was concentrating on my open university degree and planning my next career move, trying to push to the back of my mind that we had been trying for over 4 years to have a baby without success,” says Terry.

Terry and her husband Ian had wanted children ever since they married 7 years ago but were not really concerned when the months went by once they stopped using contraception.

“After about a year, we decided to give it another 6 months and then see our GP. It then took about another three months to find out that Ian's sperm count was a bit on the low side and that my fallopian tubes appeared to be blocked, more on one side than the other,” explains Terry. The combination of problems meant that they had very little chance of conceiving naturally.

The couple were devastated but relieved that at least they knew what the problem was – and that there was a way around it. “Because we had been trying for a baby without success for three years by then, and we had a known reason for our infertility, we were eligible for three rounds of in vitro fertilisation (IVF) on the NHS.”

The first two cycles failed. No pregnancy resulted from the first and the unborn baby that Terry was carrying after the second had significant abnormalities and she miscarried at 18 weeks.

“It sounds callous, but we had a few weeks to recover and then tried again – the emptiness that I felt was awful and I had such a need to feel a baby inside me again,” says Terry.

It really was third time lucky and Terry and Ian were over the moon when their 16 week check confirmed all was OK. There was more news too - they were expecting twins!

“That was not exactly a surprise as we had been warned that twins can come along as a result of IVF because two embryos are implanted. We felt fantastic about it – a complete family, all in one go,” laughs Terry.

The pregnancy progressed normally and the twins, Emma and Poppy, were born in hospital, at the end of April 2008. “We were still so happy but were we tired! I have never known that I could be so exhausted but two babies needed me, so I had to keep going on very little sleep and the first couple of months were incredibly hard. Then, just as I started to get into a routine, I got a bug and felt sick and tired and really struggled. Ian had to take a week off work, which wasn't much of a holiday for him, but I just could not shake of the bug,” remembers Terry.

After feeling under the weather for about 10 days, Terry went along for a check up to see if something more serious was wrong. She was absolutely stunned to find out that she was 8 weeks pregnant. The twins were just 16 weeks old.

The Shock of a Natural Pregnancy

“We just couldn't believe it – after the years of trying, then three cycles of IVF and losing a baby, we had conceived naturally.” The medical team who had looked after Terry during the IVF treatments examined her and their conclusion was that her fallopian tubes had been so thoroughly kicked when she was expecting the twins that they were no longer blocked.

George was born at the end of March 2009, a healthy, full term baby weighing 8lbs exactly. “Sometimes I feel as though I will never get through the day – it is very hard work – but then I look at my three babies and I am so thankful that we have them. I do miss drinking hot coffee though – can I have another one?”