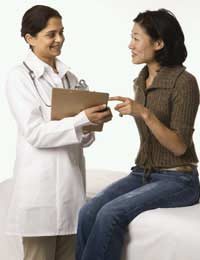 Female causes of infertility can be exhaustive, ranging from structural abnormalities, hormonal imbalance and age. For women who have difficulties getting pregnant, all possibilities must be considered before one is clearly identified. Before we delve into the causes of infertility, it's important to know the reproductive organs involved. The main female reproductive organs include ovaries, fallopian tubes, uterus, cervix and vagina. Abnormalities in any of these structures could impact a women's fecundability.

Ovarian causes of infertility can be divided into primary ovarian dysfunction and secondary ovarian dysfunction. Primary ovarian dysfunction is often diagnosed in the early adolescent years when patients fail to menstruate. This may be due to non-functional ovaries, for example as in Turner's syndrome, or the absence of internal reproductive structures altogether as in gonadal dysgenesis. These cases are rare, but need to be evaluated with chromosome analysis. These women may appear normal physically but will fail to menstruate - a condition known as primary amenorrhea. Secondary ovarian dysfunction is a condition where internal reproductive organs were functioning appropriately in the past. These abnormalities can be due to hormonal abnormalities such as thyroid dysfunction, advanced maternal age i.e. (age >35) and disease of the ovaries such as ovarian cancer and polycystic ovarian disease. In such cases a full endocrine work up needs to be done, to check hormone levels within the blood. If ovarian disease is suspected, a pelvic ultrasound will be needed in addition to more specific and more invasive tests to establish a specific ovarian cause.

This is fairly common among women. It is also a fairly common cause of infertility. In this condition fluid filled cysts being to form within the ovaries causing disturbances in ovulation and hormonal imbalance. There is also excess production of steroid hormones, leading to male pattern hair distribution (excess facial hair). Other problems associated with polycystic ovarian syndrome include insulin resistance, obesity, and localized abdominal pain. PCOS can be diagnosed through ultrasounds to show cysts in the ovaries or through blood tests of hormone levels. PCOS patients often have elevated LH (LH: FSH greater than 3:1) and excess androgens (male hormones).

PCOS can be diagnosed through a combination of a physical examination looking for nodular masses, ultrasound evaluation which looks for possible cysts in the ovaries or ovarian enlargement, and blood tests to check LH and FSH levels. The ratio of LH to FSH is an important indicator of PCOS. If the LH to FSH ratio is greater then 2:1 it is highly indicative of this condition. Other hormonal abnormalities include testosterone, DHEAS, SHBG, androstenedione, prolactin, and TSH. These women also need to have their blood sugar levels evaluated as well.

Another condition that affects the ovaries is premature ovarian failure (POF). This leads to the presence of menopausal symptoms at an earlier age. The main defect in this condition is the ovaries fail to respond to the FSH hormone. FSH is an important hormone which stimulates ovarian maturation and leads to ovulation. If the ovaries do not respond to this hormone then fecundability is affected. It is characterised by high levels of FSH in younger woman, usually in their 30s. Women who suffer from POF often experience symptoms of menopause such as hot flushes, vaginal dryness, and menstrual irregularities. Cancer treatment and environmental hazards may play a role in the development of POF.

The most common female cause of infertility is tubular dysfunction. Scarring of the fallopian tubes and adhesions, due to surgery or pelvic inflammatory disease, can lead to blockages and prevent the fertilized egg from implanting properly within the uterus. Adhesions are the formation of connective tissue which occurs as a result of healing. Adhesions and scarring are attributable to many causes. Pelvic inflammatory disease and adhesion formation due to prior surgeries are among the most common cause of tubular dysfunction. Sexually transmitted diseases, such as chlamydia and gonorrhoea infections can lead to inflammation of the pelvis. PID (pelvic inflammatory disease) is a serious condition requiring immediate attention with antibiotics. The relationship between STD's and infertility underscores the importance of a complete history and physical exam. By notifying your doctor of a sexually transmitted disease history, the doctor can explore such causes further, and lead to the appropriate diagnosis more quickly.

The uterus is another important component in the female reproductive system. It is the site where the fertilized egg will implant and continue to grow for nine months. Abnormalities in the uterus can also be a common cause for infertility. Fibroids endometritis and endometriosis are different diseases which affect the uterus and impede fertility. Fibroids are benign tumours of the uterus which can grow inside the uterine wall thus preventing implantation of the developing embryo. Endometritis and endometriosis are different in that they affect the lining of the uterus. In these conditions, scar tissue can form which can also affect the implantation and thus be a cause for infertility. Asherman's Syndrome is a condition where the walls of the uterus adhere to each other and it's usually caused by uterine inflammation.

The cervix is the gateway into the uterus. It serves as the bridge between the vagina and the uterus. Cervical mucus is a substance secreted within the vagina in response to various hormones. The characteristics of this substance change in response to reproductive hormones such as oestrogen. Inappropriate changes in the cervical mucus can lead to a hostile environment for the sperm. Cervical mucus incompatibility accounts for approximately 5% of female infertility. Special tests are available to help analyse the mucus for volume, consistency, PH and viscosity. If the PH is too acidic as in bacterial and yeast infections, the sperm will die off prematurely. If the cervical mucus is highly viscous then the sperm will have a difficult time penetrating their way to the egg.

AMA plays a very important role in fertility as, although infertility can occur at any age, it is more common after 35. Reproductive fecundability begins to decline even as early as 25 but most will achieve a successful pregnancy within a year. Women over the age of 35 fit the criteria for infertility more frequently. This rate increases as age advances past 35. Recent advances in fertility research have led to the development of tests which can access the functional quality of ovarian follicles to help determine ovarian reserve. These tests offer a more precise measure of a woman's reproductive capacity than age alone. The tests are based on hormonal levels of FSH and oestrogen, during specific intervals of the menstrual cycle. A woman's response to these tests is based on various factors and can vary from age to age.

This is a special period in a women's life when she is no longer capable of reproducing. This period is defined medically as the cessation of menses for a period of 12 months, with the presence of characteristic symptoms such as vaginal dryness, atrophy and hot flashes. For most women this occurs around the age of 51-52 but can occur in the late 40's as well. During this phase the ovaries are no longer responsive to the cyclical changes in FSH.

Reproductive endocrinology is a crucial component of the reproductive system. This system serves as the communication link which controls the organs responsible for reproduction. The principle hormones involved in this process include Follicle stimulating hormone, (FSH), Luteinizing hormone, (LH) and Oestrogen. The delicate balance of these hormones causes changes in the menstrual cycle, leads to ovulation, and prepares the uterus for implantation.

Changes in hormone levels can occur at the level of the reproductive organ or can be due to problems in higher centres such as the central nervous system. It may be surprising to learn that problems with infertility may unmask even more serious conditions which may have gone unnoticed. Tumours of the brain such as pituitary tumours, prolactinomas (tumours which secrete prolactin), and even thyroid abnormalities are prime examples. Prolactin and Thyroid Stimulating Hormone (TSH) have a unique interaction with reproductive hormones. Prolactin and TSH inhibit FSH and LH thus affecting the process of ovulation. Conditions affecting the thyroid and CNS (Central Nervous System) tumours should be thoroughly explored, if such history is documented. Infertility is a very complicated process, which can be affected by many things. This is why the history and physical examination are so important. Being truthful, accurate and detailed in your history can really help the enquiring clinician come to an accurate diagnosis.

Other endocrine abnormalities which affect fertility include Luteal phase defect (LPD) and Luteinized unruptured follicle syndrome (LUFS). In luteal phase defects there are two types of luteal phase problems that fall under this category. One is a short luteal phase being 10 days or less, normal luteal phase lasts 14 days and is pretty consistent. The second is when the length of the phase is out of step with progesterone production leading to decreased progesterone. Progesterone is the principal hormone, which sustains pregnancy. It is secreted by the corpus luteum, during the later half of the menstrual cycle. Luteinized unruptured follicle syndrome (LUFS) occurs when there is failure of the follicle to release an egg even though it has reached maturity. Commonly seen when an LH surge is not followed by ovulation. This can be confirmed with ultrasound and may account for 5-30% of women with unexplained infertility.

Chemotherapy and radiation can cause early menopause and lead to premature ovarian failure. Chemotherapies are designed to attack cells, which are in various stages of cell division. The purpose of such agents is to curb the accelerated growth of cancer cells. These therapeutic agents can have an adverse effect on reproductive cells that are also governed by similar mechanisms.

Although this is rarely seen in modern day society, Synthetic oestrogen used in the 50s and 60s to prevent miscarriage can cause abnormalities in the reproductive organs. DES (diethylstilbestrol) exposure was seen during this era and its complications surfaced later in the next decade, leading to its discontinued use. Some complications of DES exposure include shortened cervix, deformities of the vagina, and a characteristic T-shaped uterus. These abnormalities adversely affect the women's ability to get pregnant later in life.

Pesticides may also damage a woman's eggs leading to early menopause. Some materials are linked to early miscarriage such as ethylene oxide, used in chemical sterilization of surgical instruments. Such exposure puts some professionals at greater risk then others. Healthcare professionals for example are routinely handling such instruments and over the years this constant chronic exposure could be the cause of infertility.

In rare cases, non-steroidal anti-inflammatory drugs (NSAIDs), psychiatric medications, radiation and chemotherapy for cancer treatment, antihistamine and decongestants may also lead to fertility problems. Vitamin C in large doses is also considered an antihistamine which can lead to cervical mucus drying out.

This refers to a condition when women suffer recurrent miscarriages. Testing can be done to try to determine the cause of such losses. When evaluating the cause, smoking, drug use (especially cocaine use), and domestic violence all need to be ruled out. If an underlying condition is found, the woman may need to be treated for the problem before a pregnancy can be carried to full term. Smoking is associated with an approximately 5% increase in miscarriage rate. It also doubles the chances of an ectopic pregnancy by damaging the cilia in the tubes. Studies have shown a marked decrease in effectiveness of IVF and GIFT in women who are chronic smokers. Cocaine can lead to recurrent miscarriages since it affects blood vessels. There is increased risk of bleeding complications such as abruption placentae (rupture of the placenta) in women who use cocaine while pregnant.

Dietary habits can affect fertility as well. For example women who are vegetarian may experience irregular ovulation thus reducing the chance of conception.