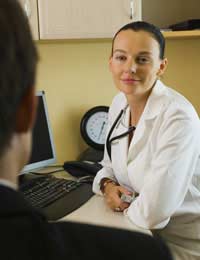 The causes of infertility in males can be divided into four main categories: structural abnormalities; hormonal imbalance; lifestyle issues and medical conditions, such as autoimmune disease and genetic abnormalities. Although rare, genetic conditions play a major role in male infertility. We deal here with each cause individually, but in reality many of these causes may be interrelated.

The male reproductive organs are responsible for producing sperm, semen and channelling this fluid into the female reproductive tract. The principle organs include: testes, epididymis, vas deferens, seminal vesicles, prostate gland, and penis. Damage to any one of these vital structures can compromise fecundability (the reproductive capacity) of the male.

Prior surgery to reproductive organs can also lead to fertility complications. For example hernia repair can sometimes damage the vas deferens. Testicular torsion is a highly painful and extremely urgent condition requiring emergency surgery to salvage the tortuous testicle; if unsuccessful, this delicate operation can also impair fertility. In cases of undescended testes where an orchiopexy is performed, it can also lead to fertility compromise. Orchiopexy is a surgical procedure where by the undescended testis is manually positioned into the scrotum. Vasectomy reversal: vasectomies although designed to be permanent, can often be reversed. Reversal of recent vasectomies is most successful, but if a substantial period of time has passed, the male bodies' defences may reject the sperm as foreign, therefore harming fertility.

Trauma to the Reproductive Organs

Trauma to the male reproductive organs can impact male fecundability as well. Severe trauma to the testes can severely damage the sperm-producing organ. Penile fractures can also occur, and do so during vigorous sexual activity, usually with the female partner on top. Although there is no bone inside the penis the underlying connective tissue can be hyper extended to the point that structural integrity becomes compromised.

During normal male development, the testes are situated inside the abdomen, and usually migrate to their proper position, inside the scrotal sac. In some cases however the testicles fail. This can occur bilaterally, with both testicles, and unilaterally, with one testicle. The failure to descend may create an inhospitable environment for proper sperm development. Sperm are highly sensitive to factors such as PH, and temperature. Normally sperm require a temperature 1 degree Celsius cooler then basal body temperature. The scrotal sac facilitates this by positing the testes away from the rest of the body.

A varicocele is a common cause of male infertility. It is a medical condition whereby veins, which channel blood away from the penis and scrotum, become diseased. This causes pooling of venous blood and also leads to infertility. Large varicoceles that go untreated can cause permanent damage to the testicles leading to testicular failure or atrophy.

The reproductive endocrine system is a highly delicate and complex system that works in balance with the internal and external environment. The principal hormones of the male reproductive system are follicle stimulating hormone (FSH), luteinizing hormones (LH) and testosterone (T). Endocrine disorders can be caused by abnormalities in the CNS such as the brain or peripheral organs such as the thyroid gland or the adrenal gland. The thyroid hormone, although not directly involved in producing reproductive hormones, can exert its effect on fertility indirectly by inhibiting the production of FSH and LH. Low testosterone levels can be caused by abnormalities in the adrenal glands, or specialised cells of the testes called "Leydig cells". Elevated levels of prolactin, as seen in conditions such as brain tumours, can impact fertility much the same way as the thyroid hormone. Prolactin is also a potent inhibitor of FSH, and LH.

The lifestyle category is the most generalised of the three, encompassing social habits, as well as medications and medical treatments. Social habits such as smoking cigarettes and marijuana can severely impact sperm quantity and quality. Alcohol can also affect fertility because it is a risk factor for impotence.

Social habits such as smoking cigarettes, using marijuana, and alcohol are hard to relinquish. Knowing their effect on fertility however may make it easier. Research data shows consistently low levels of sperm count in men who smoke cigarettes when compared to those who don't. Marijuana smokers also show the same effect. Decreased sperm count is a common cause of infertility in men. This often reversible cause, accounts for a large number of male cases of infertility. Drinking alcohol can also impact fertility, although not directly by sperm counts, but indirectly by causing impotence. Excessive alcohol use is a risk factor for impotence.

Sperm cells are highly sensitive to changes in the environment. Temperature and PH play an important role in maintaining their functional capacity. The purpose of the scrotal sac, which houses the testes, is to separate the sperm-producing organ from normal body temperature. The scrotal temperature is usually 1-2 degrees cooler then normal body temperature. When wearing tight fitted undergarments, or extremely short underwear, the scrotal temperature is increased. Hot saunas and heated pools may also lead to the same effect, so when attempting to conceive it is best to avoid such things.

Although rare in today's society DES (diethylstilbestrol) exposure was commonly seen in the past. This synthetic oestrogen was used in the 1950s and 60s by women to avoid miscarriage. It can severely impact sperm quality by affecting sperm counts, decreasing sperm motility and leading to abnormal sperm morphology.

Cancer treatments such as chemotherapy and radiation can cause abnormal sperm or sterility. Patients requiring such treatments who have a desire to have children should seek the advice of a fertility expert to make arrangements for sperm cryopreservation. Cryopreservation is the process of freezing sperm cells in liquid nitrogen, storing them for use in the future.

Certain medicines and recreational drugs can decrease male fertility including alcohol, marijuana, cocaine, smoking, anabolic steroids, sulfasalazine, cimetidine (Tagamet, used for ulcers), nitrofurantoin (used for UTI), anti-hypertensive drugs (specifically calcium channel blockers), aspirin, Dilantin (for epilepsy), Colchicine, and even antidepressants. Despite their negative effect on fertility, prescribed drugs should not be stopped. Instead you should chat to your doctor, who will offer advice on alternative medications offering similar benefits, but without the infertility side effects.

Both men and women can have immune reactions to sperm. There is a lot of controversy about how prevalent this is. Immune reactions to sperm in the man (autoimmune) can be a problem and usually occurs post-vasectomy, but may also have other causes. In rare instances anti-sperm antibodies may develop in patients with highly sensitive immune systems. This is indicated by hyper-viscosity of the seminal fluid, which may impede forward progression. In mild cases, anti-sperm antibodies in the male or female (alloimmune) may be overcome by Intra uterine insemination procedures (IUIs). If IUI does not work, or if the problem is considered too severe, IVF may be necessary, with ICSI likely for male anti-sperm antibodies. Prednisone, an anti inflammatory medication, may be tried to see if it extinguishes the immune sensitivity to the sperm.

One of the less common causes is actually a medical problem. A variety of causes can lead to this including diabetes and even some medications. Loss of libido is another sexual disorder, defined by a diminished desire for sexual intercourse. Some medications cause this as well, most notably SSRI anti-depressants.

Infections are also a major player in male infertility. Infections from early child hood, such as post pubertal mumps, and even sexually transmitted diseases (STDs) can result in infertility. These factors underscore the importance of a thorough history and physical examination. It is important to be honest and open with your doctor. Venereal diseases such as gonorrhoea and Chlamydia can negatively affect male fertility by infecting the epididymis, which is the storage organ for sperm cells. Infection such as prostatitis can also impact fertility by lowering sperm count and sperm motility especially if it is recurrent or left untreated.

This is a genetic disorder that affects only males. In this condition there is a chromosomal defect leading to an extra Y chromosome. This condition is known as Trisomy and leads to a chromosomal configuration of XYY. Normal males have the configuration XY. Logic dictates that such men should be vigorously fertile. Despite having high levels of testosterone, their fertility is severely compromised. Such males are in fact sterile. Physically they are generally tall and thin, with small underdeveloped testicles.

This is a multi system disorder that affects the heart and lungs. It is characterised by dextrocardia, (heart is placed on the right side) and respiratory infections. This is a cell motility disorder, which affects tiny motile components of the cells called cilia. Since this condition affects the motility components of the cells, it also impacts sperm motility. This is the main reason why men who suffer from this condition are infertile.
Next Page